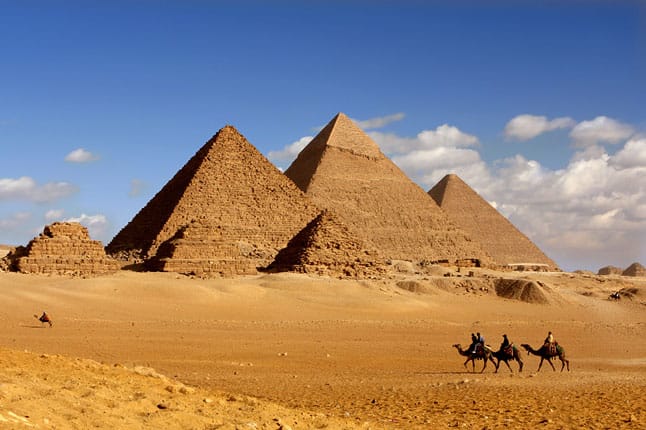 The Pyramids of Giza, the last of the Seven Wonders of the Ancient World still remaining

Two factors are essential to properly identifying people and events in our planet’s history: space and time. This unit teaches the skills of a historian necessary to correctly target where and when a civilization existed and how to interpret its history. Human history is greatly entwined with Earth’s geography.

Space - Throughout history a civilization’s fate has largely been determined by its location.  Location gives each civilization certain advantages and disadvantages: either an abundance or lack of resources, either a secure territory or one vulnerable to invasion, either a pleasant climate with a long growing season or a harsh environment with a limited food source, and either proximity to trade routes with foreign peoples or cultural isolation.

Time - It is necessary to understand dating systems to correctly order events to identify cause and effect in history.  During this course, you will begin to construct a mental timeline of the major events of human history.

​Civilization - Unit 1 also investigates the millions of years which passed from the emergence of the human species until the development of the earliest known civilizations. This unit examines some of the earliest major human civilizations in the Near East including Sumer, Egypt, Phoencia, Assyria, and Persia.  Fertile river valleys allowed abundant yields from farming.  Plentiful food gave humans the luxury of spare time and energy to develop new technologies including writing and metalwork.  The social pyramid and the rule of law were established.  Similar patterns of development occurred in the river valleys of ancient India and China.​