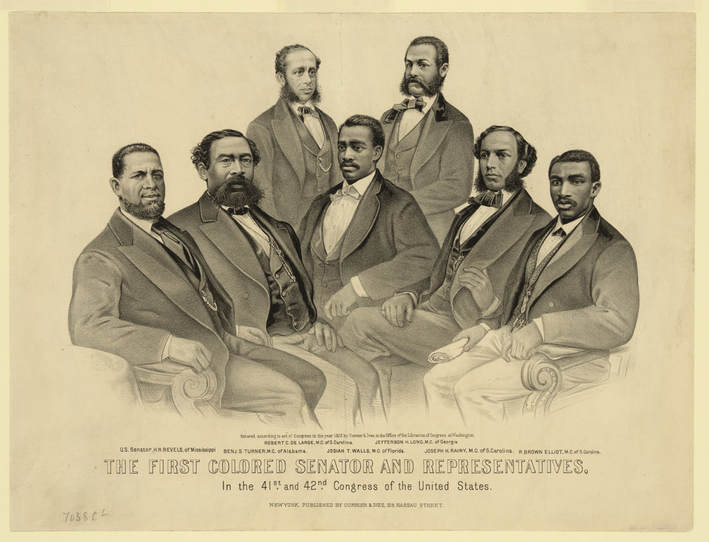 The era of Reconstruction witnessed a few moments of true progress. One of those was the election of African Americans to local, state, and national offices, including both houses of Congress. Pictured here are Hiram Revels (the first African American Senator) alongside six black representatives, all from the former Confederate states. Currier & Ives, First Colored Senator and Representatives in the 41st and 42nd Congress of the United States, 1872. 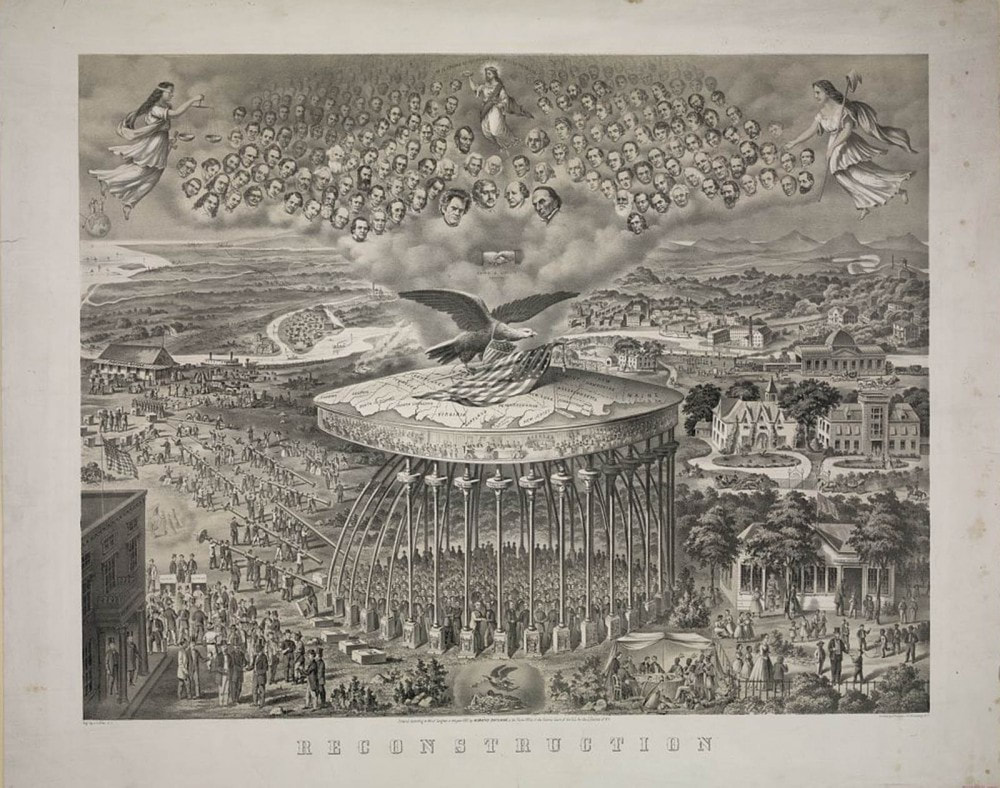 While no one could agree on what the best plan for reconstructing the nation would be, Americans understood the moment as critical and perhaps revolutionary. In this magnificent visual metaphor for the reconciliation of the North and South, John Lawrence postulates what might result from reunion. Reconstruction, the print seems to argue, will form a more perfect Union that upholds the ideals of the American Revolution, most importantly (as seen on a streaming banner near the top) that “All men are born free and equal.” John Giles Lawrence, Reconstruction, 1867. 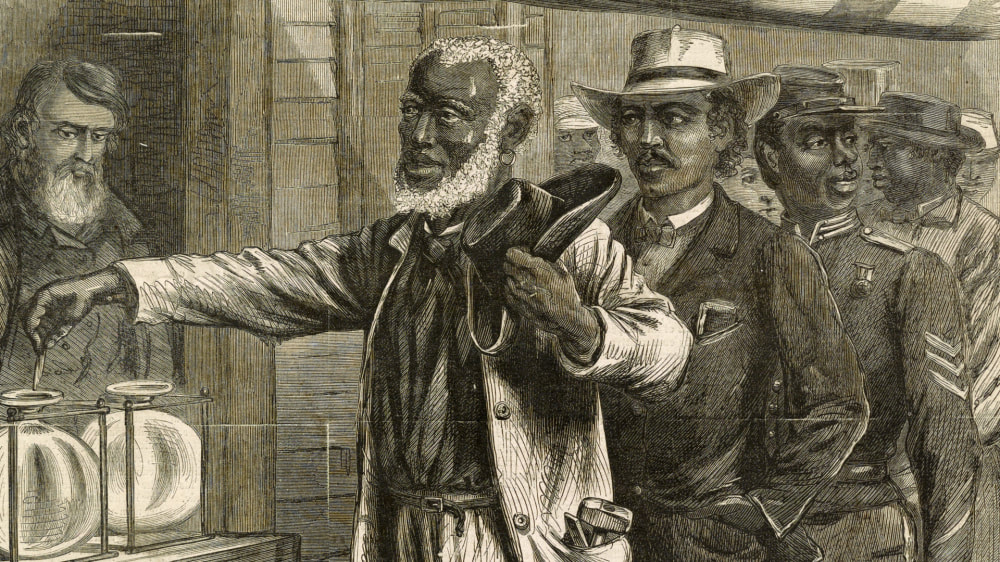 With the passage of the Fifteenth Amendment, droves of African American men went to the polls to exercise their newly recognized right to vote. In this Harper’s Weekly print, black men of various occupations wait patiently for their turn as the first voter submits his ballot. Unlike other contemporary images that depicted African Americans as ignorant, unkempt, and lazy, this print shows these black men as active citizens. Alfred R. Waud, The First Vote, November 1867.

Reconstruction began before the War ended. After his famous March to the Sea in January of 1865, General William T. Sherman and Secretary of War Edwin Stanton met with twenty of Savannah’s African American religious leaders to discuss the future of the freedmen of the state of Georgia. In the excerpt below, Garrison Frazier, the chosen spokesman for the group, explains the importance of land for freedom. The result of this meeting was Sherman’s famous Field Order 15, which set aside confiscated plantation lands along the coast from Charleston, S.C. to Jacksonville, FL. for black land ownership. The policy would later be overruled and freedpeople would lose their right to the land.

Black Americans hoped that the end of the Civil War would create an entirely new world, while white southerners tried to restore the antebellum order as much as they could. Most slave-owners sought to maintain control over their former slaves through sharecropping contracts. P.H. Anderson of Tennessee was one such former slave-owner. After the war, he contacted his former slave Jourdon Anderson, offering him a job opportunity. The following is Jourdon Anderson’s reply.

Charlotte Forten was born into a wealthy black family in Philadelphia. After receiving an education in Salem, Massachusetts, Forten became the first black American hired to teach white students. She lent her educational expertise to the war effort by relocating to South Carolina in 1862 with the goal of educating former slaves. This excerpt from her diary explains her experiences during this time.

Many southern governments enacted legislation that reestablished antebellum power relationships. South Carolina and Mississippi passed laws known as Black Codes to regulate black behavior and impose social and economic control. While they granted some rights to African Americans – like the right to own property, to marry or to make contracts – they also denied other fundamental rights. Mississippi’s vagrant law, excerpted here, required all freedmen to carry papers proving they had means of employment. If they had no proof, they could be arrested, fined, or even re-enslaved and leased out to their former master.

Most histories of the Civil War claim that the war ended in the summer of 1865 when Confederate armies surrendered. However, violent resistance and terrorism continued in the South for over a decade. In this report, General J.J. Reynolds describes the lawlessness of Texas during Reconstruction.


A case of sexual violence during Reconstruction, 1866

These documents chronicle a case in the wider wave of violence that targeted people of color during Reconstruction. The first document includes Frances Thompson and Lucy Smith’s testimony about their assault, rape, and robbery in 1866. The second document, demonstrates one way that white Southerners denied these claims. In 1876, Thompson was exposed for cross-dressing. For twenty years she successfully passed as a woman. Southerners trumpeted this case as evidence that widely documented cases of violence, sexual and otherwise, were fabricated.

Americans came together after the Civil War largely by collectively forgetting what the war was about. Celebrations honored the bravery of both armies, and the meaning of the war faded. Frederick Douglass and other black leaders engaged with Confederate sympathizers in a battle of historical memory. In this speech, Douglass calls on Americans to remember the war for what it was—a struggle between an army fighting to protect slavery and a nation reluctantly transformed into a force for liberation.

This print mocks Reconstruction by making several allusions to Shakespeare. The center illustration shows a black soldier as Othello and President Andrew Johnson as Iago. Johnson’s slogans “Treason is a crime and must be made odious” and “I am your Moses” are on the wall. The top left shows a riot in Memphis and at the top a riot in New Orleans. At the bottom, Johnson is trying to charm a Confederate Copperhead. General Benjamin Butler is at the bottom left, accepting the Confederate surrender of New Orleans in 1862. This scene is contrasted to the bottom right where General Philips Sheridan bows to Louisiana Attorney General Andrew Herron in 1866, implying a defeat for Reconstruction. Click on the image for more information.

This 1870 print celebrated the passage of the Fifteenth Amendment. Here we see several of the themes most important to black Americans during Reconstruction: The print celebrates the military achievements of black veterans, the voting rights protected by the amendment, the right to marry and establish families, the creation and protection of black churches, and the right to own and improve land. Unfortunately, many of these freedoms would be short-lived as the United States retreated from Reconstruction.